The “kiddie tax”: more dangerous than ever 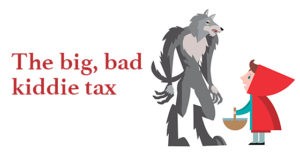 Once upon a time, parents and grandparents tried to save tax by putting investments in the names of their young children or grandchildren who are in lower income tax brackets. To discourage such tactics, Congress created the “kiddie” tax back in 1986. Now, because of the new Tax Cuts and Jobs Act (TCJA), the kiddie tax has steadily become more far-reaching and more dangerous than ever.

What about the kiddie tax rate? Before the TCJA, children subject to the kiddie tax who received any unearned income beyond $2,100 for 2017 were taxed at their parents’ marginal rate (believing it was higher), rather than their likely low rate.

A fiercer kiddie tax
The TCJA doesn’t further expand who’s subject to the kiddie tax, but it will successfully increase the kiddie tax rate in multiple situations.

Through 2018 to 2025, the tax brackets used for trusts and estates will be used to tax a child’s unearned income beyond $2,100 for 2018. For regular income (such as interest and short-term capital gains), trusts and estates are taxed at the highest marginal rate of 37% once 2018 taxable income exceeds $12,500. In contrast, a married couple filing jointly won’t have to worry until their 2018 taxable income tops $600,000 because the highest rate doesn’t kick in until then.

In other words, in most cases, a child’s unearned income will be taxed at higher rates than their parents’ income. As a result, shifting income to children who are subject to the kiddie tax will not only not save tax, but it could increase a family’s overall tax liability.

The moral of the story
To avoid unintentionally increasing your family’s taxes, consider the awful kiddie tax before shifting highly appreciated or income-producing assets to a child or grandchild who’s a minor or college student. If you’d like to shift income and you have adult children or grandchildren who aren’t subject to the kiddie tax and in a lower tax bracket, consider moving such assets to them.

If you have any questions about the kiddie tax or other TCJA changes that may affect your family, contact us.

Be aware of the tax consequences before selling your home

Summer is the peak season for selling a home in many parts of the country. If you are planning on putting your home on the market soon, you are probably thinking about things like how Read more…

What qualifies as a “coronavirus-related distribution” from a retirement plan?

As you may have heard, the Coronavirus Aid, Relief and Economic Security (CARES) Act allows “qualified” people to take certain “coronavirus-related distributions” from their retirement plans without paying tax. So how do you qualify? In Read more…

How to – Opt Out of QuickBooks Usage and Analytics Study (yes, you were opted-in by default)

How do I block Intuit from accessing my data for its study? You may have seen this window appear during or after an update. About the QuickBooks Usage & Analytics Study Only the administrator of Read more…